A 12-year-old boy died from an asthma attack during recess.

Ryan Gibbons could have simply used his inhaler at the beginning of the episode, but the life-saving device had been taken from him and locked in the administrative office.

A group of Ryan’s friends carried him to the office during the attack. The boys couldn’t get to the inhaler in time.

He passed out and never was revived.

This tragedy occurred at the Elgin Country School in Ontario, Canada. Sarah Gibbon’s, Ryan’s bereft mother, is now leading a movement to have school’s change their inane policies regarding inhalers.

She hopes to change the laws that keep asthmatic children from being able to carry their life-saving devices.

She is working to pass a bill called “Ryan’s Law” that would allow children to carry their inhaler in their pocket or backpack with a doctor’s note.

According to his mother, Ryan would often take an extra inhaler to school in order to circumnavigate this rule.

Asthma attacks aren’t always predictable, and it is dangerous to keep the inhaler locked in a room. The school kept taking his extra inhaler away, however.

In an interview with a national network in Canada, Ryan’s mom said that the school would call many times asking her to pick up an inhaler that Ryan had brought to school.

He wasn’t allowed to bring it home.

It seems that no reasonable person would support this law, but there are still many places where it is written into law.

All 50 states within the U.S. have passed laws allowing children to carry inhalers. Even with these laws in place, some schools don’t allow their students this basic right.

Many schools fear a lawsuit if a child were to use the inhaler incorrectly or allow another child to use it.

Maureen George, a nursing professor for the University of Pennsylvania questions why schools make this justification and then allow children with asthma problems to exercise when a nurse isn’t present.

George also noted that many schools ban inhalers through their blanket anti-drug policies. She doesn’t understand this contradiction. 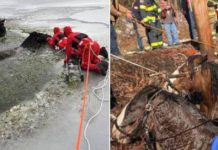