One french professional animal photographer named Jean-Michel Labat, shot pne special pet of hers – and the photos went viral almost instantly! Meet her cat Narnia, who is an adorable British Shorthair cat who gets the royal camera treatment right in its home located in France! Many pictures of this uniquely-colored cat are making headlines all over the internet, and people were left amazed by Narnia’s gradient-like fur pattern!

Ms. Labat has captured the unique looks of the feline perfectly via photography, in which the coloration most probably occurred within the early stages of development in Narnia’s mother’s womb. Blue-eyed Narnia was born on 28 March 2017, and was cared for by his breeder, Stephanie Jimenez. While the exact cause of this particular cat’s striking appearance remains unknown, other cats with this mysterious fur pattern are known as chimeras. A feline chimera is a cat whose cells contain two types of DNA when two embryos fuse together, causing the cat to have a combination of fur colors and even other physical traits.

The album was named ‘Chatterie de la Grace’, which roughly translates to Cattery of the Grace in English. ‘Chat’ refers to a cat in French, and her album houses multiple shots of Narnia – from her time as a young kitten to a fully-bloomed adult feline!

Look how adorable Narnia is as a kitten – she was so tiny back then! Narnia’s two-toned fur pattern suited her well – in both Ms. Labat’s photography and apartment! Today, Narnia is still very much doted on by Ms. Labat – and we all know why! Watch the video of the adorable cat below! 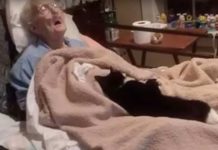 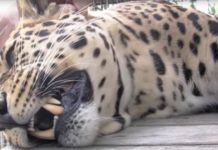 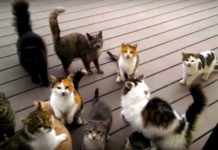 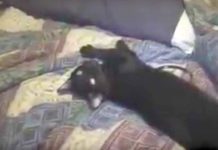 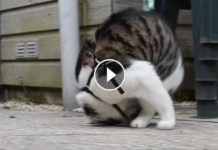 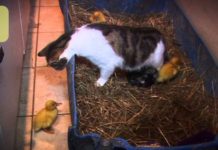 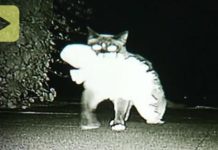 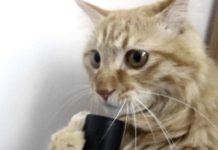 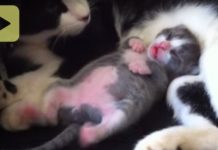